... this page still is under construction ...

is a simple yet powerful graphical planning and coordinating tool. Originally developed using Winterp and Motif , it's now being redesigned and ported to Guile and Guile-Clutter. 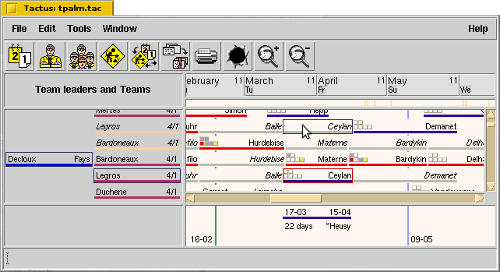 started, not under that name though, as one of the modules of a large collaborative research project financed by both the industry and the Economic European Community, involving universities for the feasability and prototyping phase, which is how we got involved. For those happy to dig in history, here is the official reference: , Proposal , Contract .

When the research project ended, we decided to go ahead and invest to turn the prototype what became : a stable, robust, simple and yet powerful graphical planning and coordinating tool.